In this project, the customer allowed us to do whatever we want, but on one condition - not to go beyond the agreed budget, which was quite modest.

Usually our team manages all stages: from design to commissioning of the object, and this object was no exception.

We quickly decided on the concept of the interior, we wanted something unusual, but the tight budget did not allow us to go wild. The idea of Suprematism was born on its own when it was decided to add a blue bed in the form of a cube to the red kitchen, and there a yellow stand for magazines near the sofa appeared. 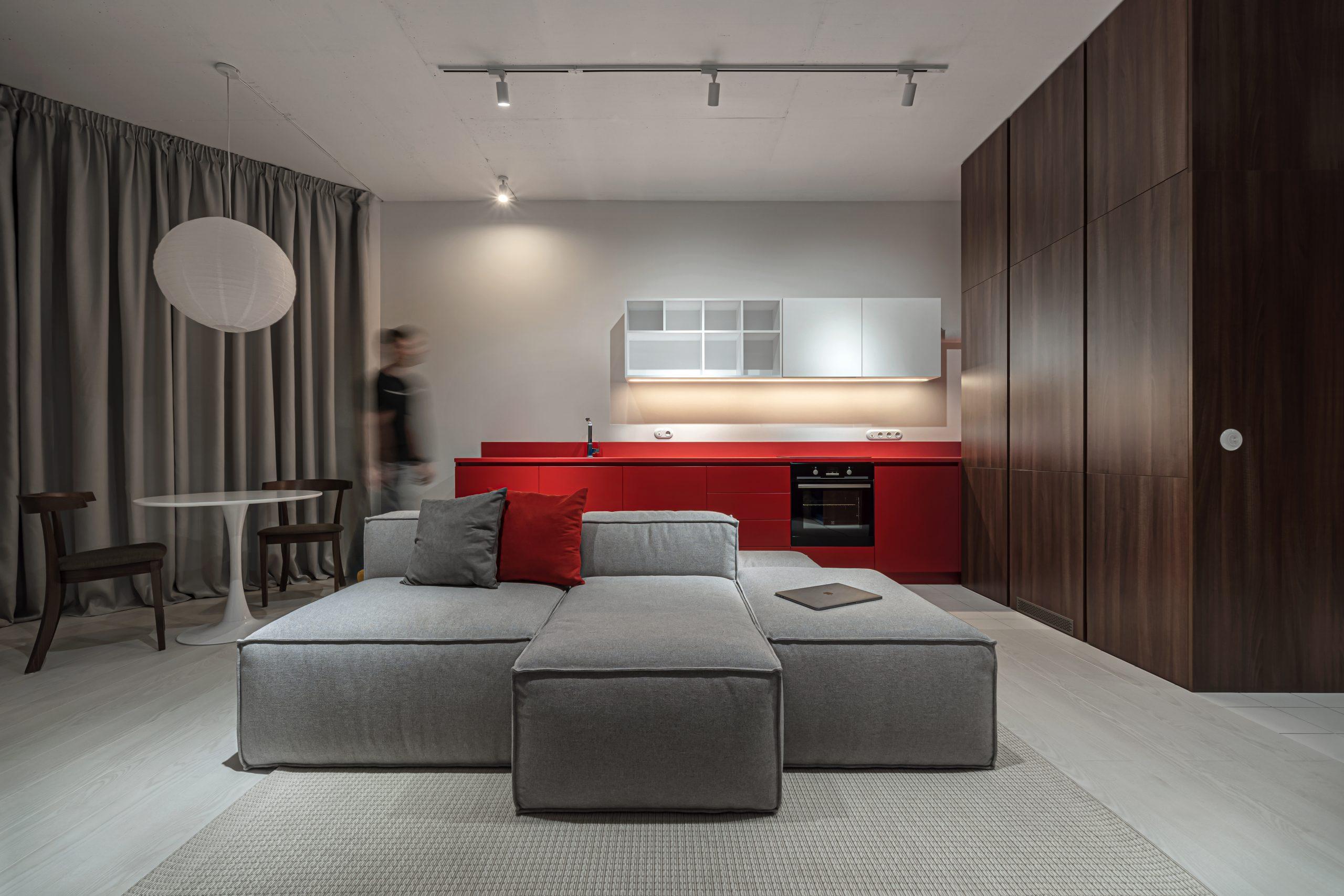 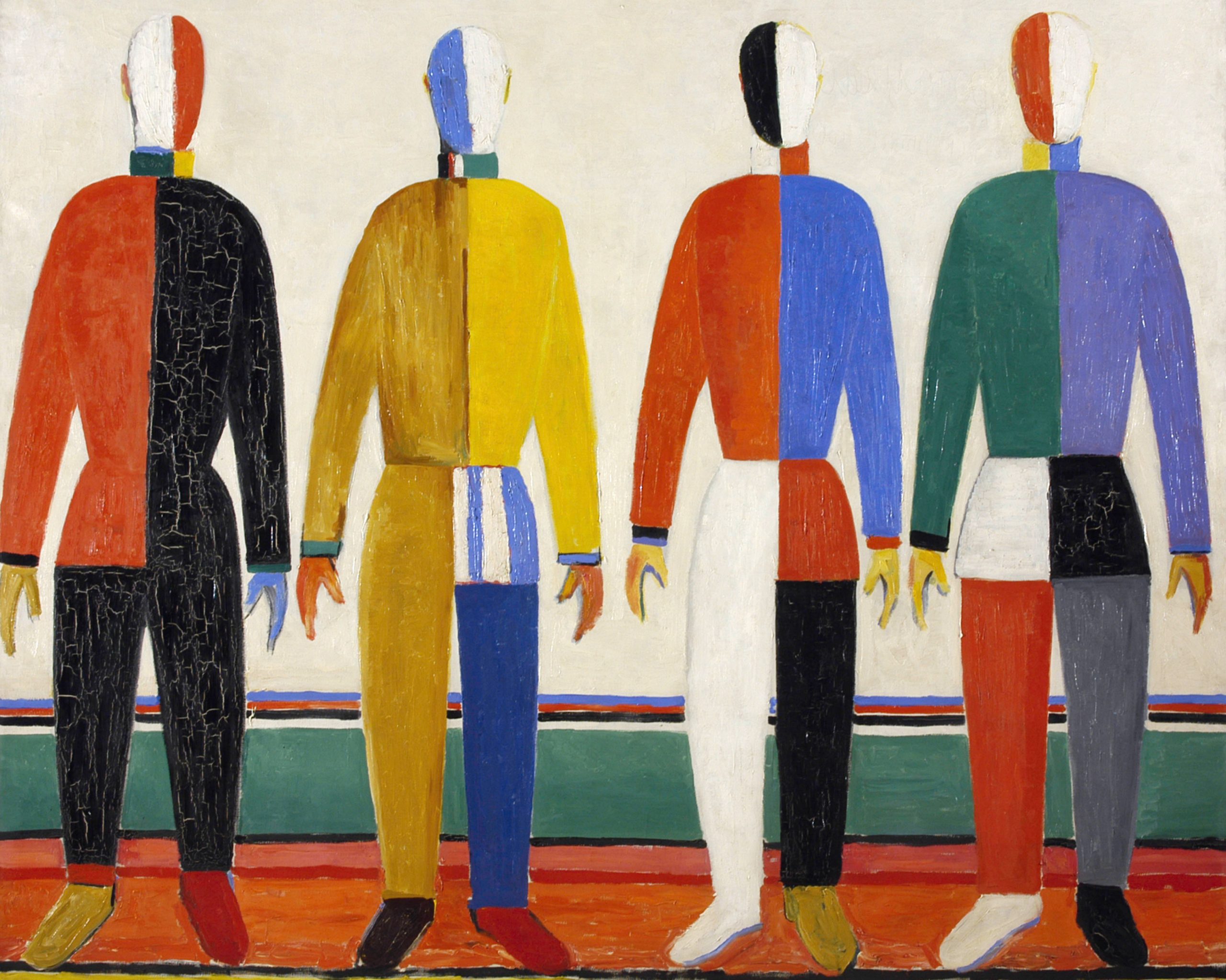 A trend in avant-garde art founded in 1915 by Kazimir Malevich.

At the initial stage, this term, going back to the Latin root supremus, meant dominance, the superiority of color over all other properties of painting. In non-objective canvases, paint, according to K. S. Malevich, was for the first time freed from an auxiliary role, from serving other purposes – Suprematist paintings became the first step of “pure creativity”, that is, an act that equalized the creative power of man and Nature. 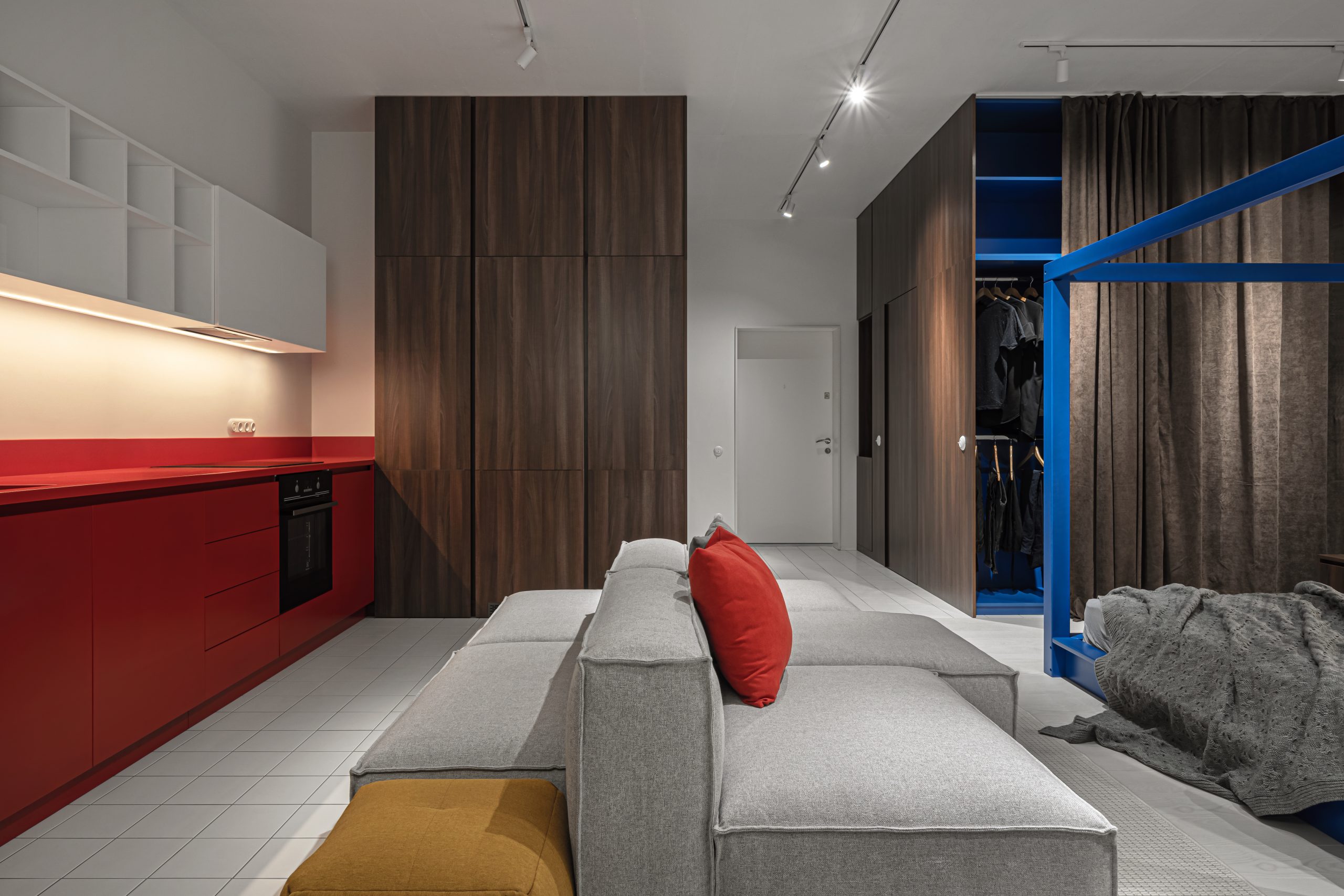 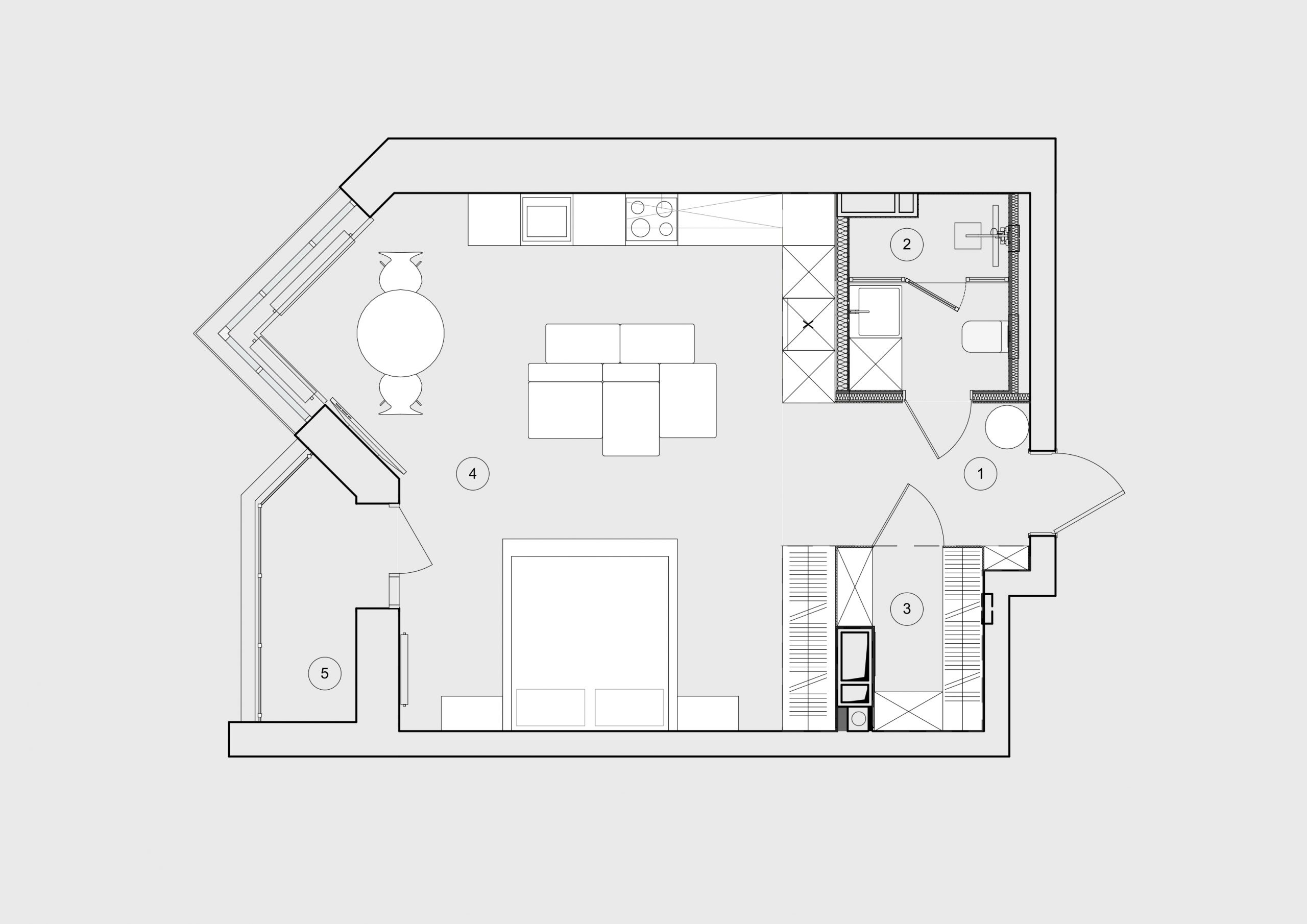 Regarding the bed, there were quite a few different ideas, one of which was to separate the kitchen area from the bedroom with a partition, but given the area of ​​​​the apartment of 52 sq.m, we understood that we were losing a lot in terms of visual perception.

The optimal solution was to use a bed, which itself defined a separate sleeping area due to the shape in the form of a cube. In the initial version, the bed frame was more openwork, metal, but the recalculation showed that this approach was beyond the agreed budget. We were lucky and we managed to find a Ukrainian-made bed frame for a reasonable price. In addition, the performers agreed to paint the frame in the desired RAL color absolutely free of charge. 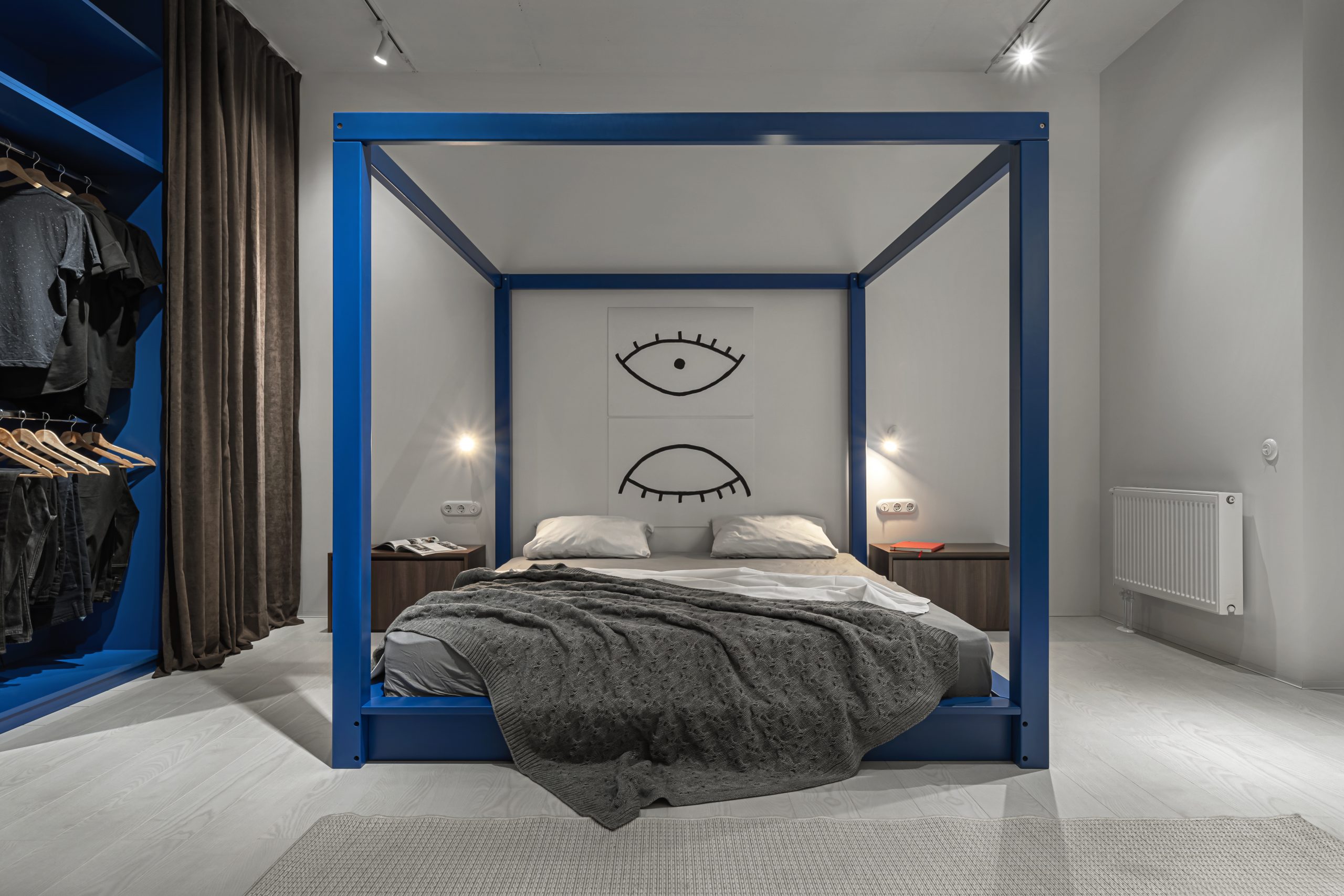 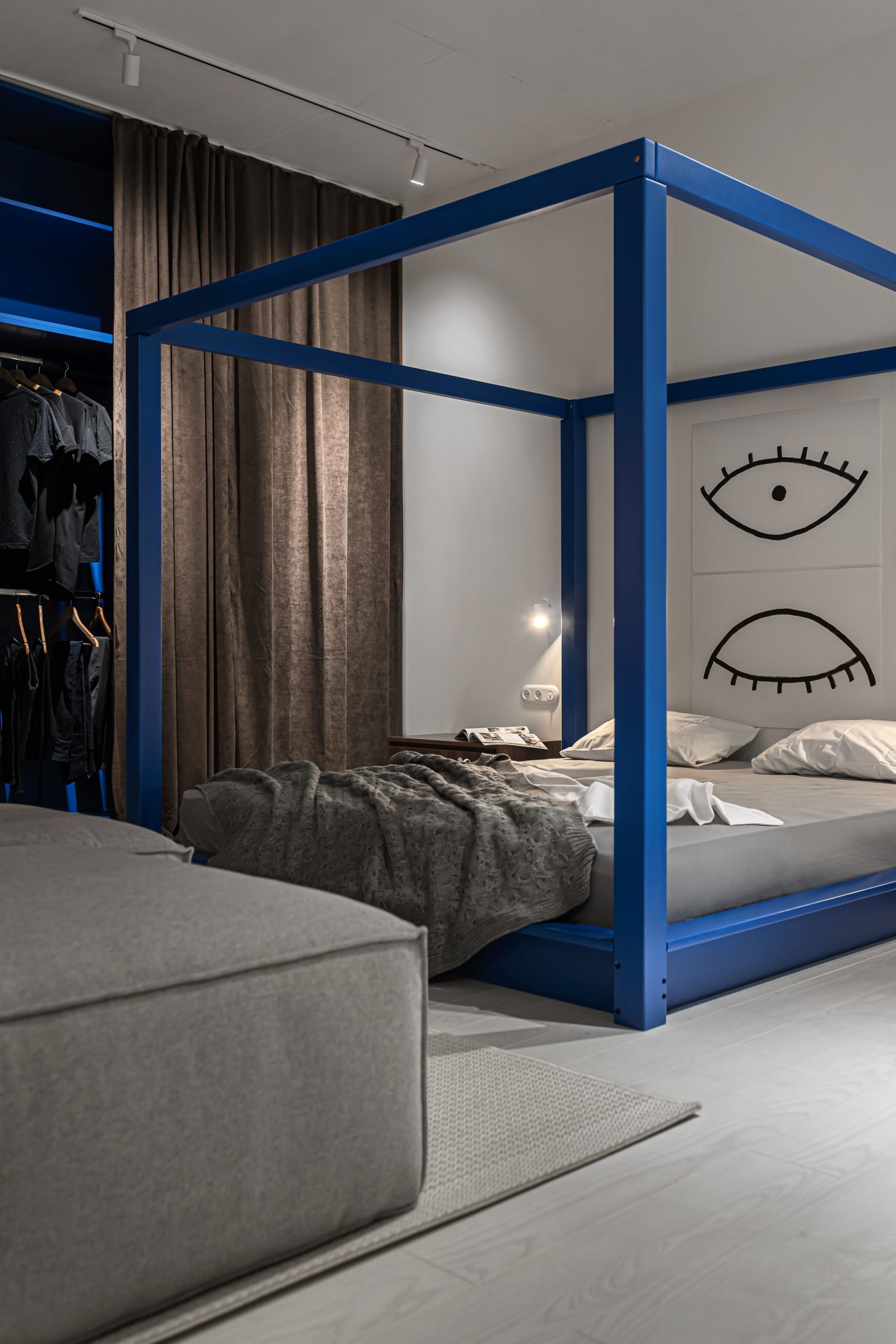 We learned the lesson of our previous project “LIPKY TWINS” well, where after painfully thinking for a long time what to make a terracotta kitchen with a terracotta countertop, where in the end we poured it out of concrete and painted it in the desired color. Such a decision in this project was not appropriate, since a concrete countertop is a rather expensive undertaking, which weighs more than 200 kg. In our case, as soon as we realized that we wanted a red kitchen and a red countertop, we began to select options, and rather quickly settled on an artificial stone, the color of which all the facades of the kitchen itself were then painted. 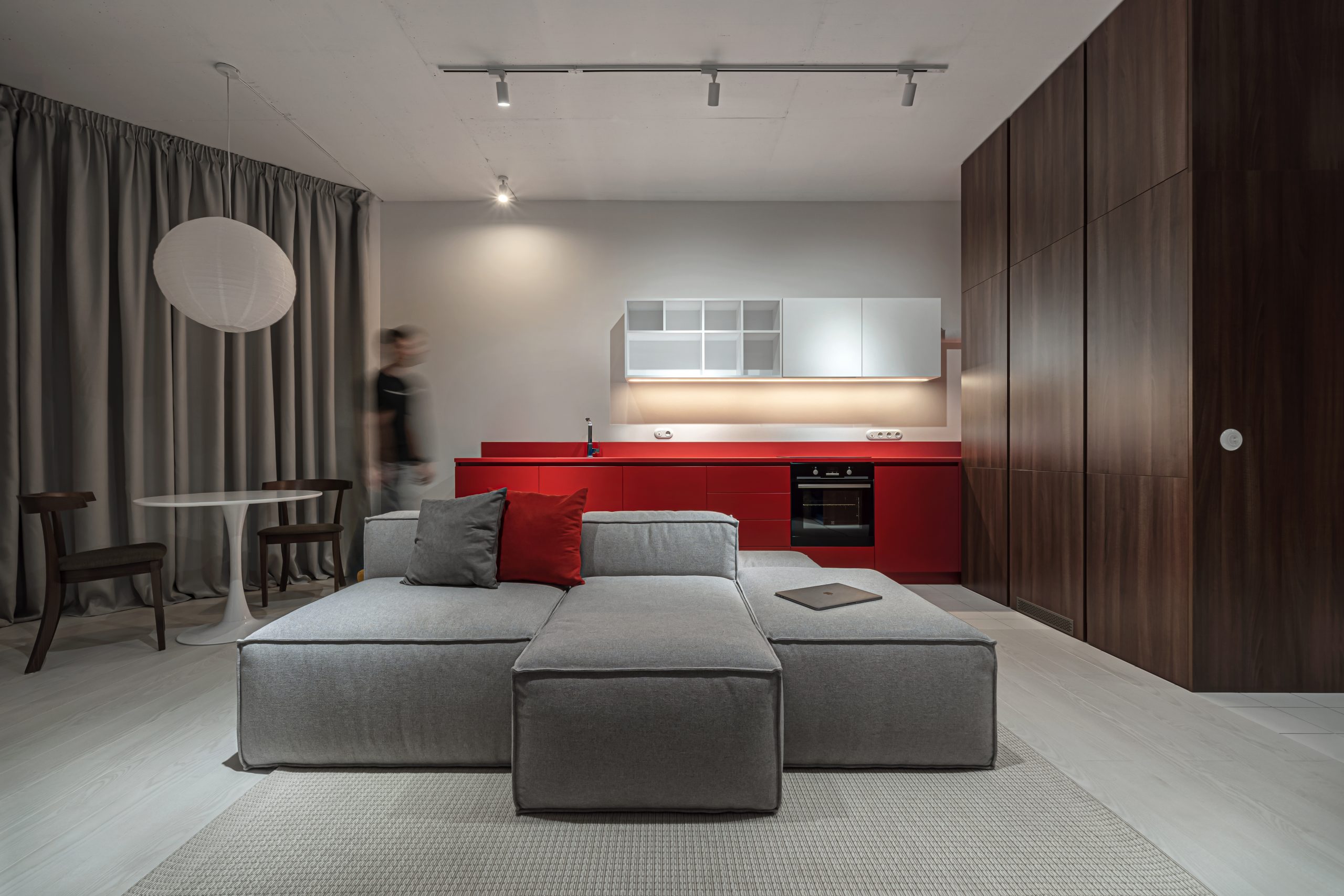 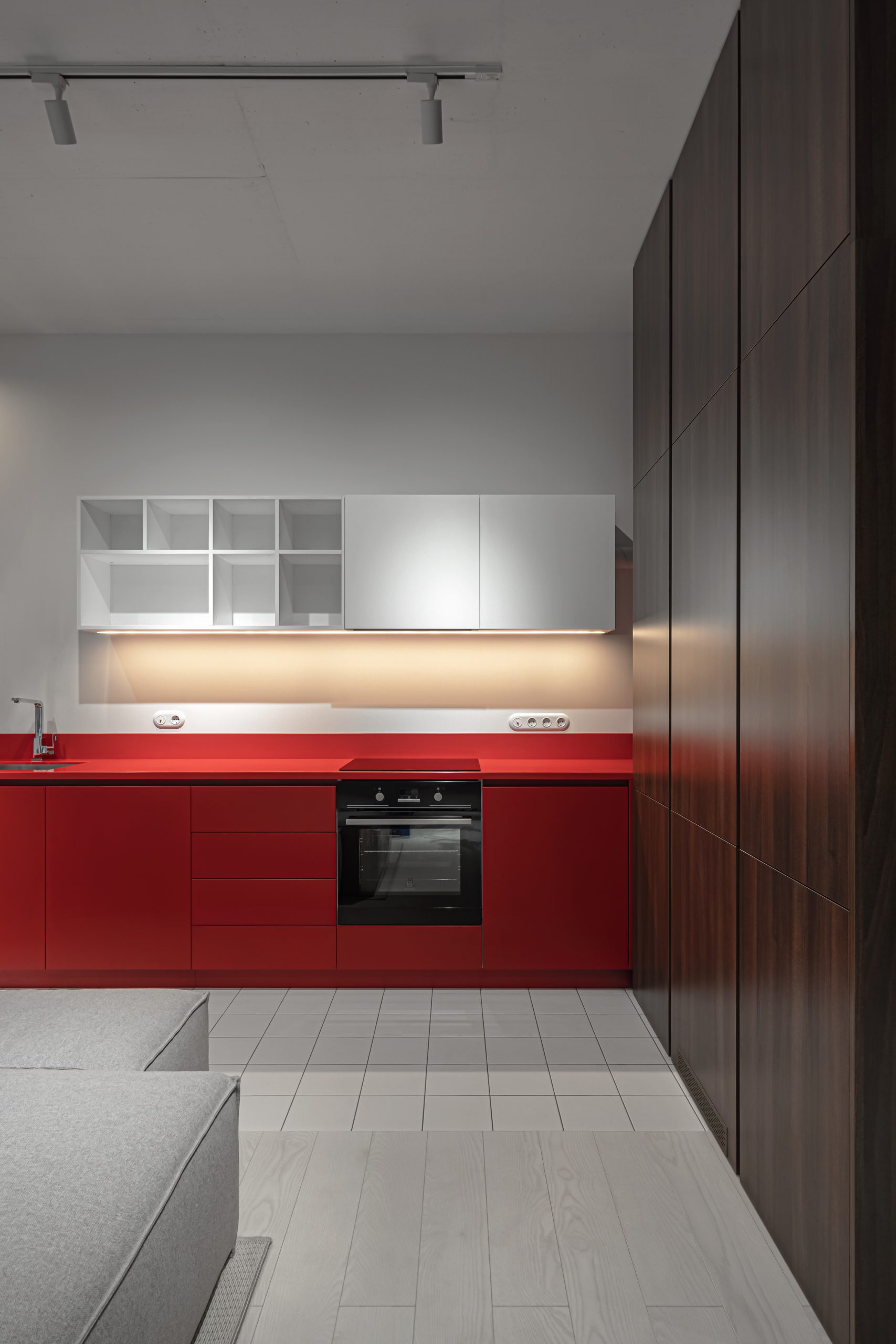 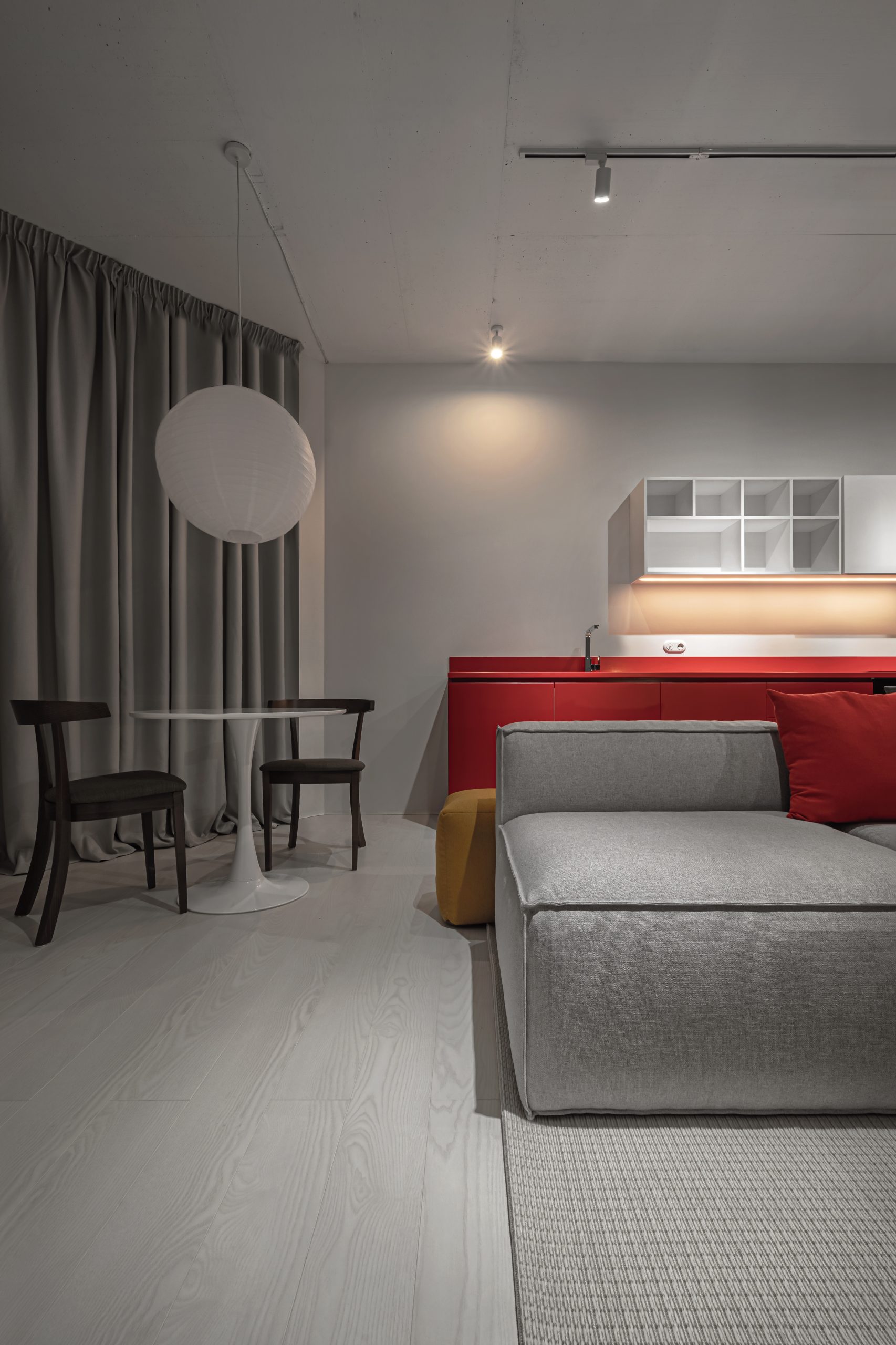 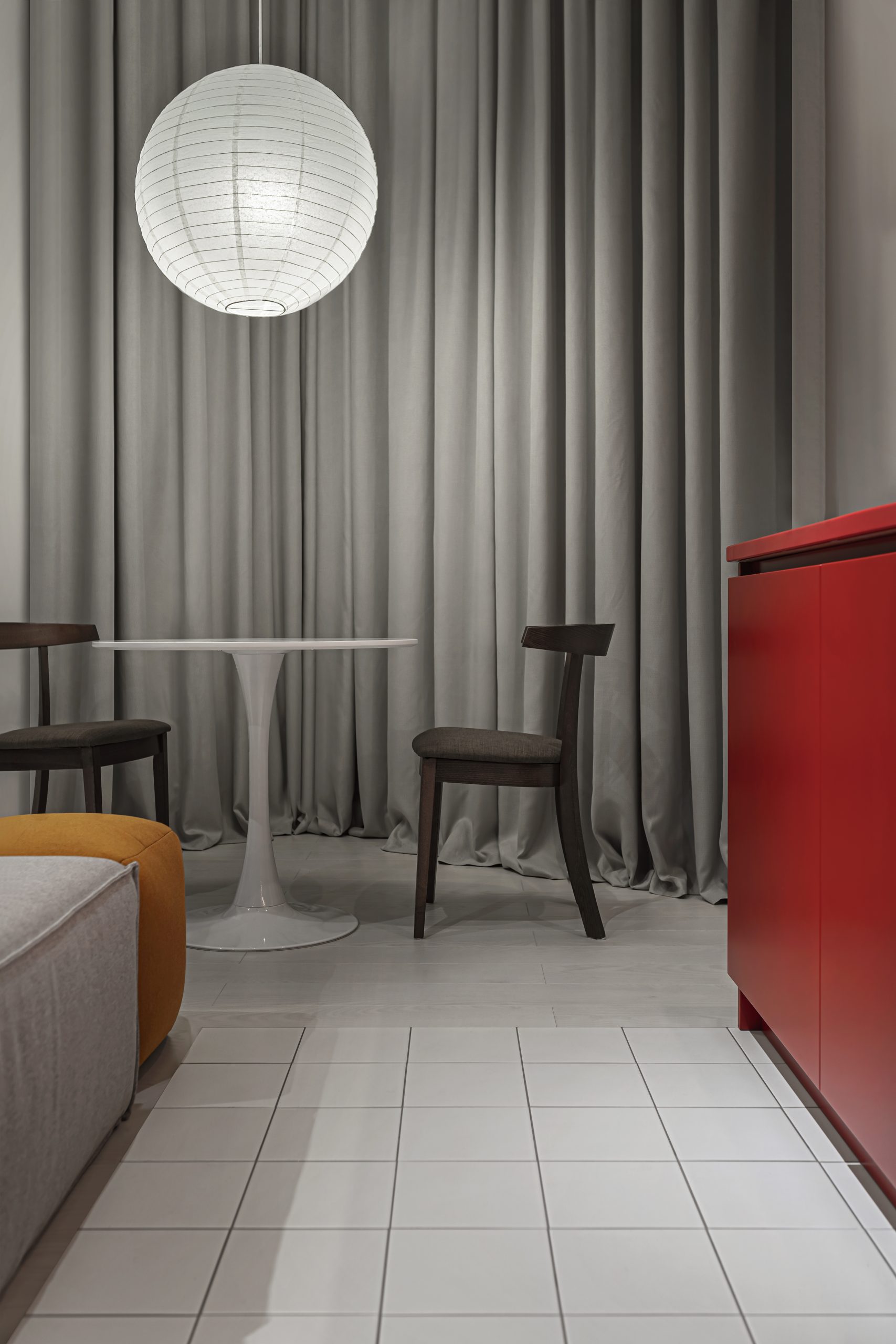 This is the case when we managed to use all 52 squares as rationally as possible, so that every meter worked for us. The wardrobe itself turned out to be quite roomy, in addition to the function of the wardrobe itself, it was possible to bring all engineering communications into this zone and successfully hide them behind furniture structures.

The outer contour of the wardrobe is tied in one line with the kitchen pencil cases, which allowed freeing up some extra space for the wardrobe on the side of the bed, so the wardrobe turned into a two-sided one. 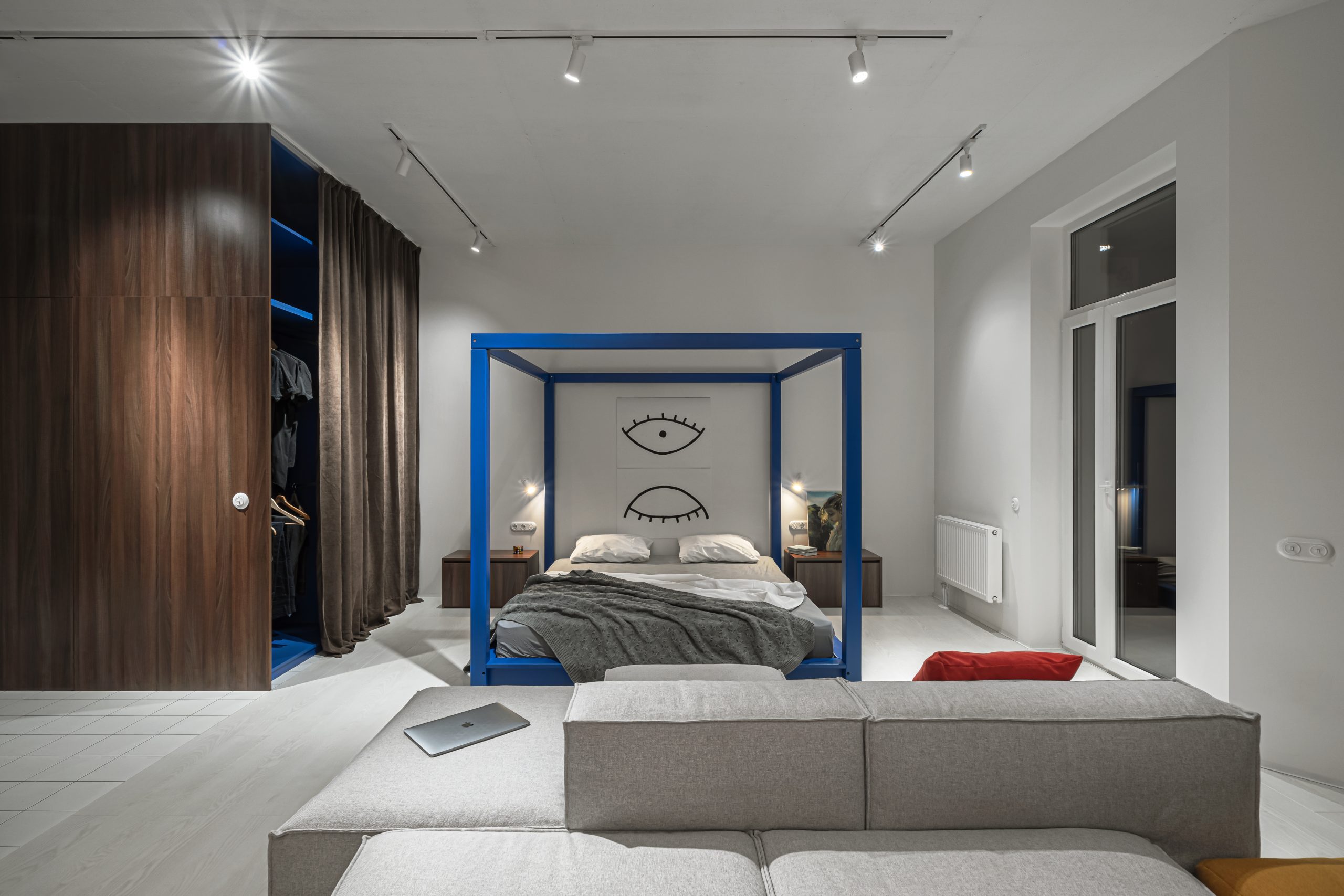 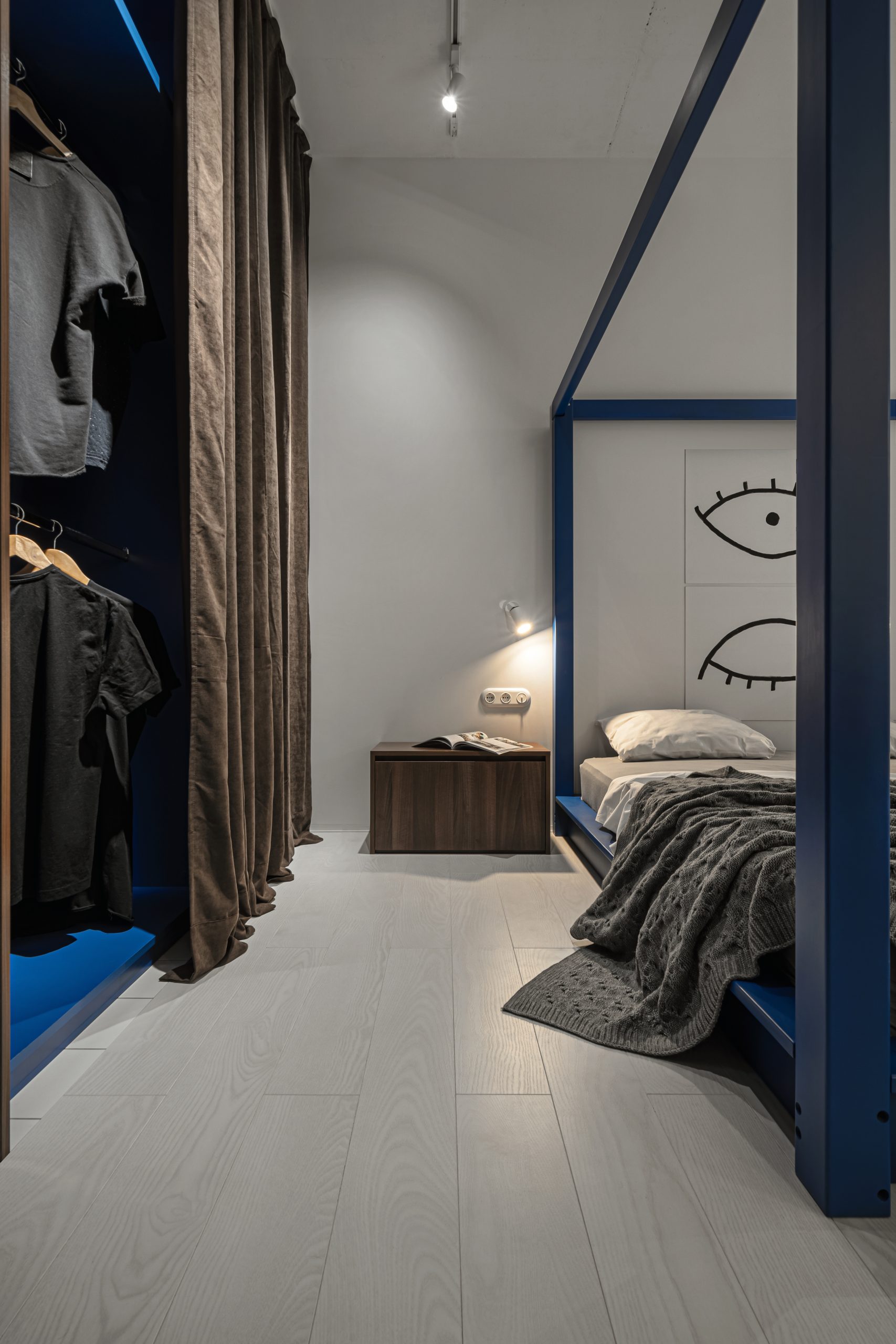 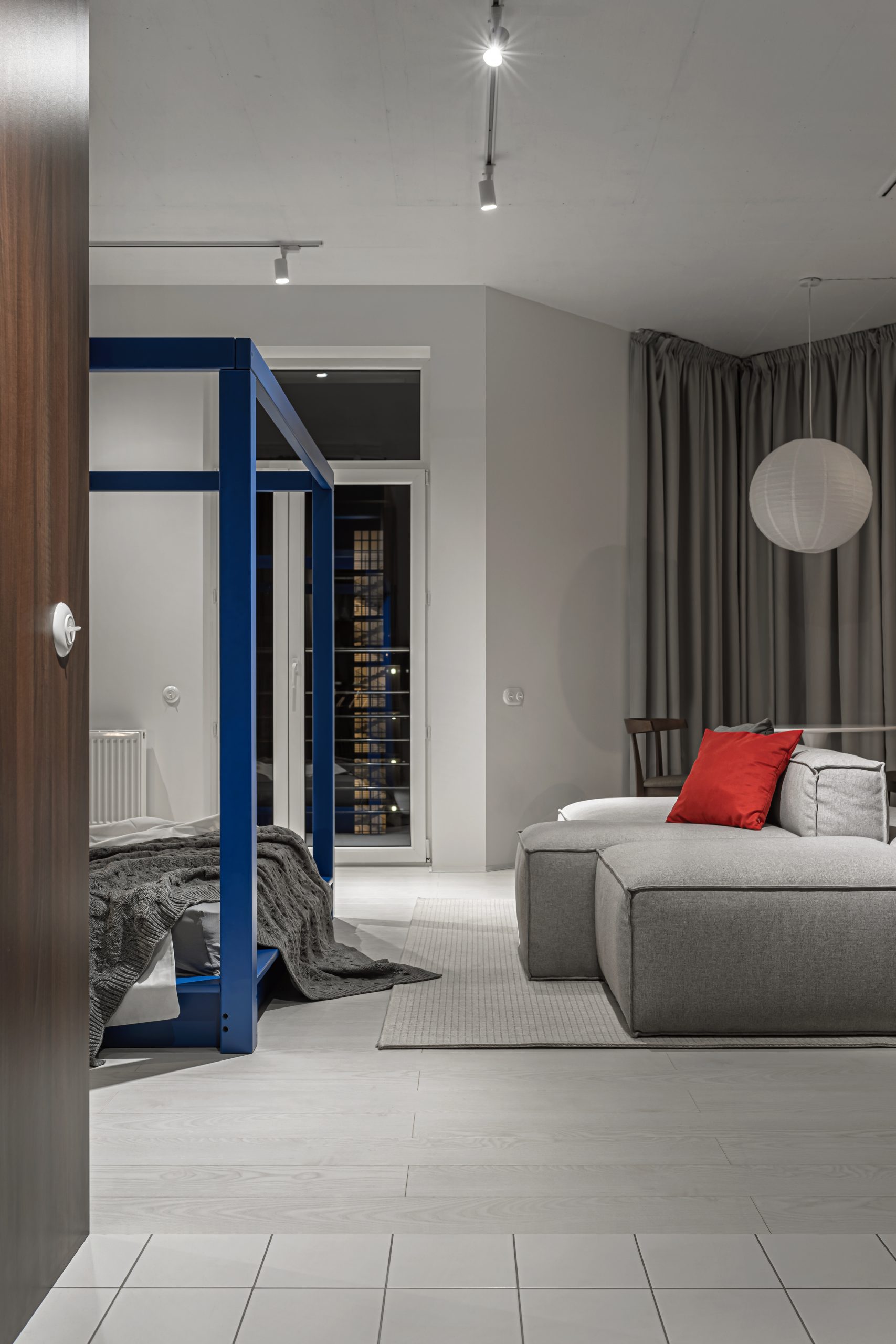 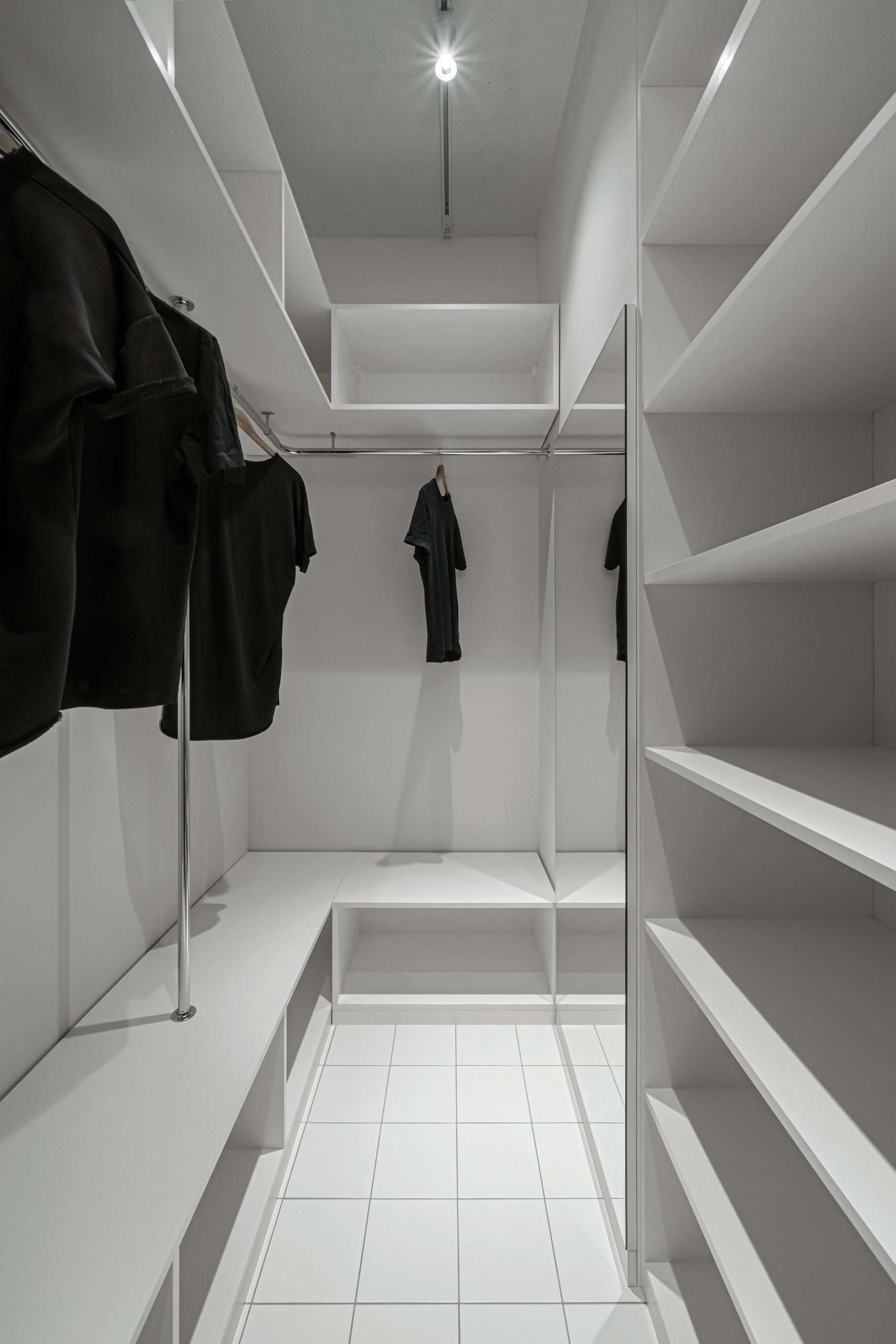 In the original concept, the wall in the shower room was supposed to be lined with mosaics, and with the image of cosmonaut Yuri Gagarin, who holds his hand on the head of Bender from Star Wars. 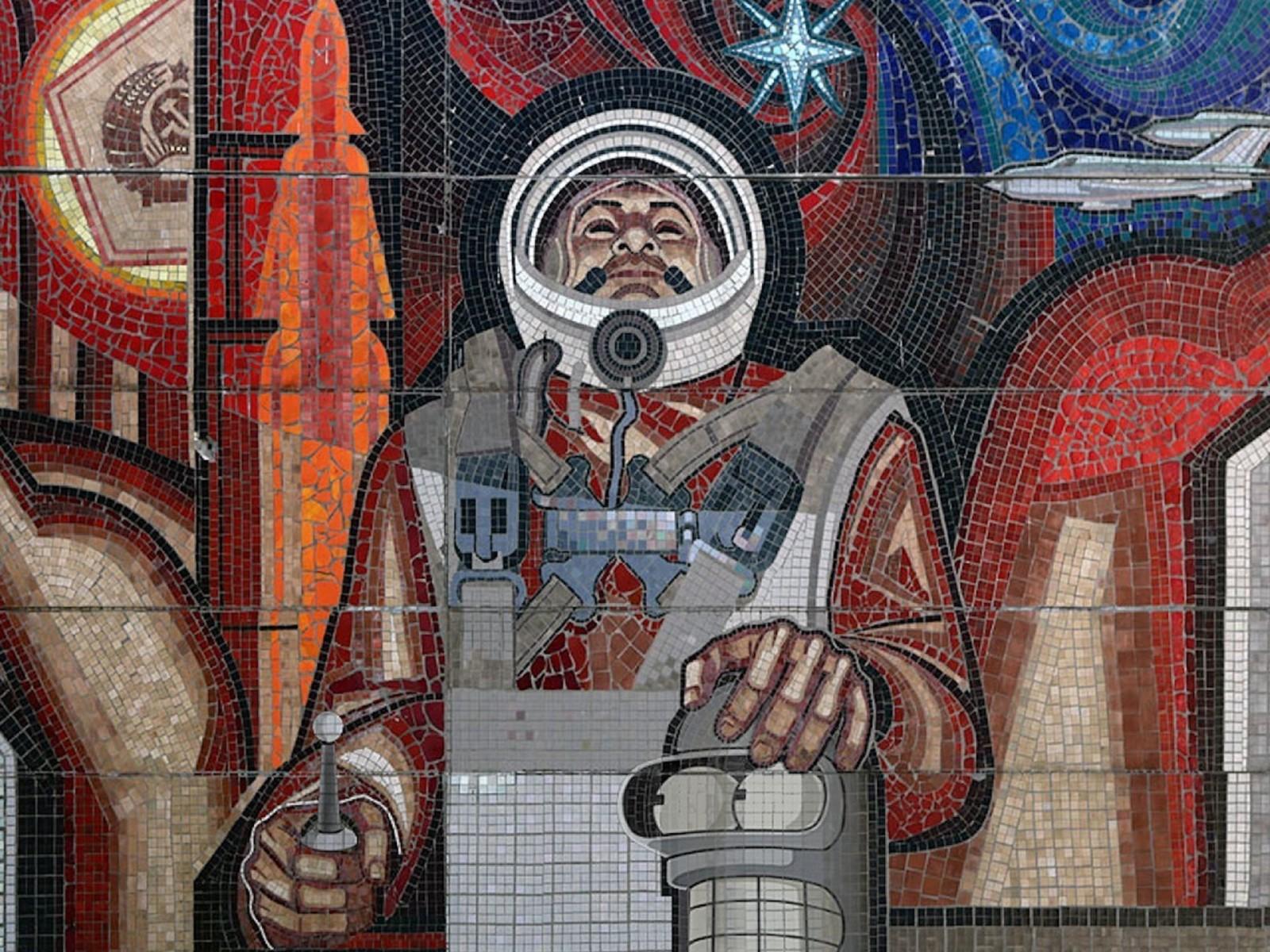 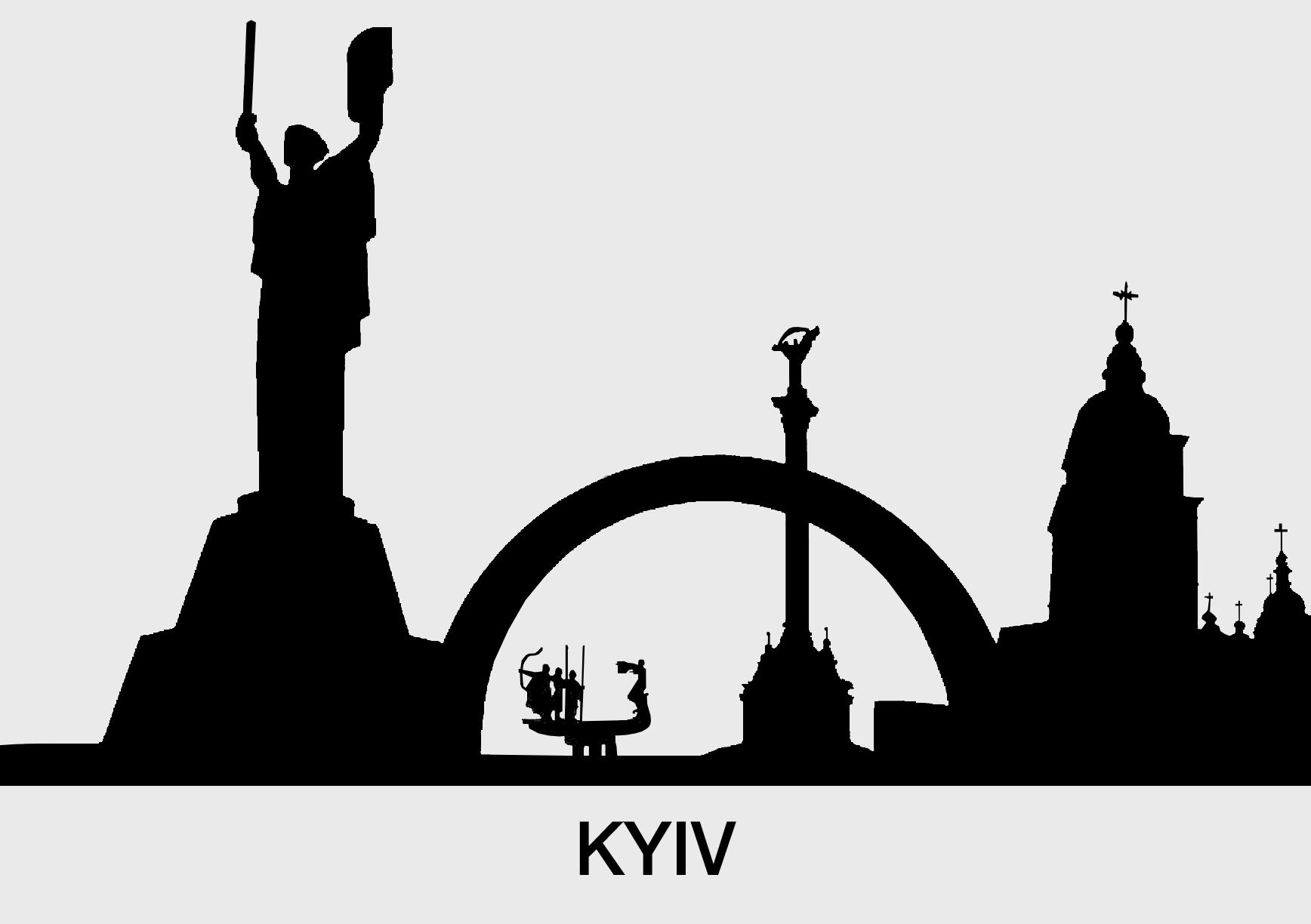 When we calculated how much it would cost to lay out a similar drawing from a mosaic, it became obvious that the budget would not pull the implementation of this idea. We looked for other, more budget options, but none of them fit. After that, a strong-willed decision was made to lay out the tiles on their own. 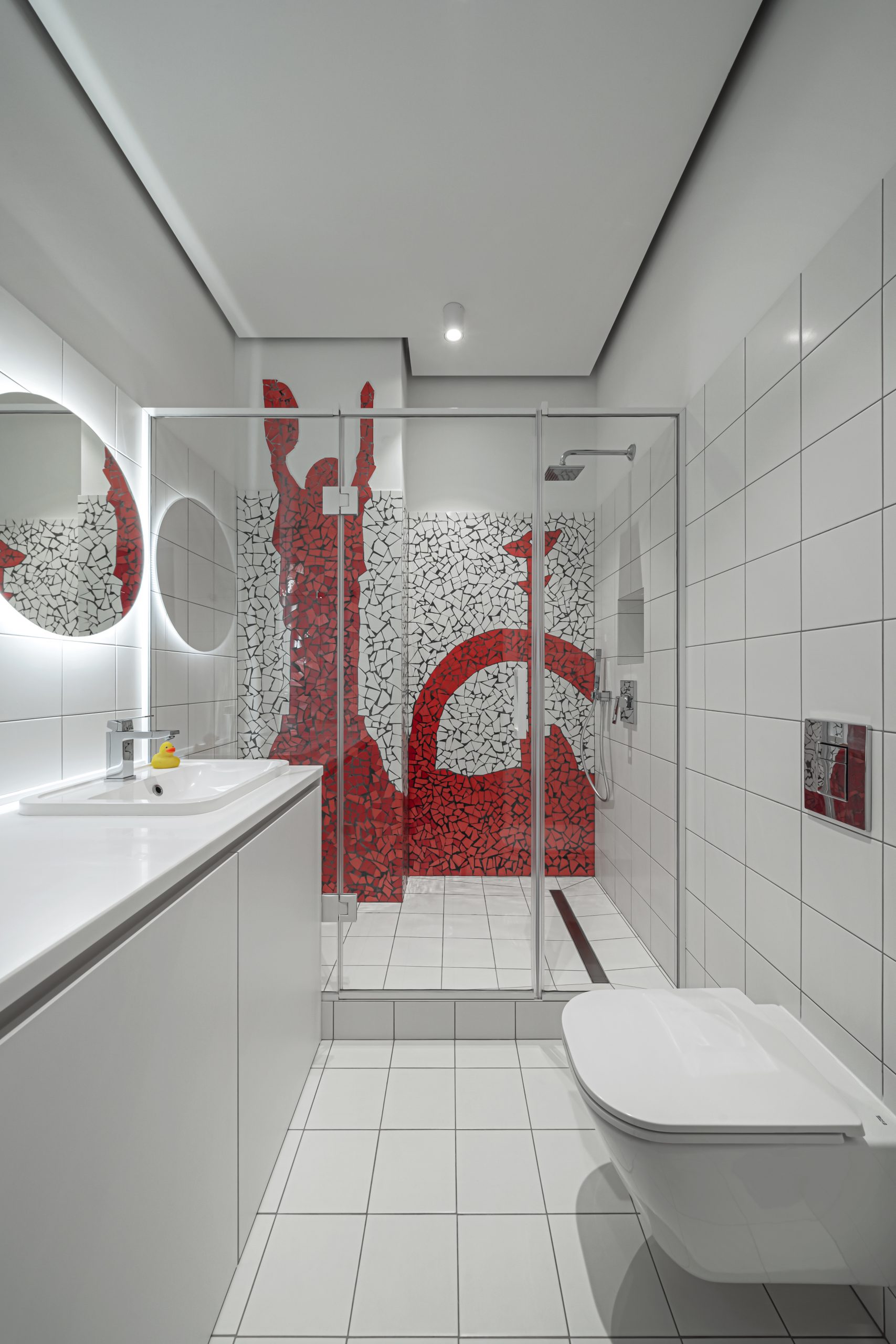 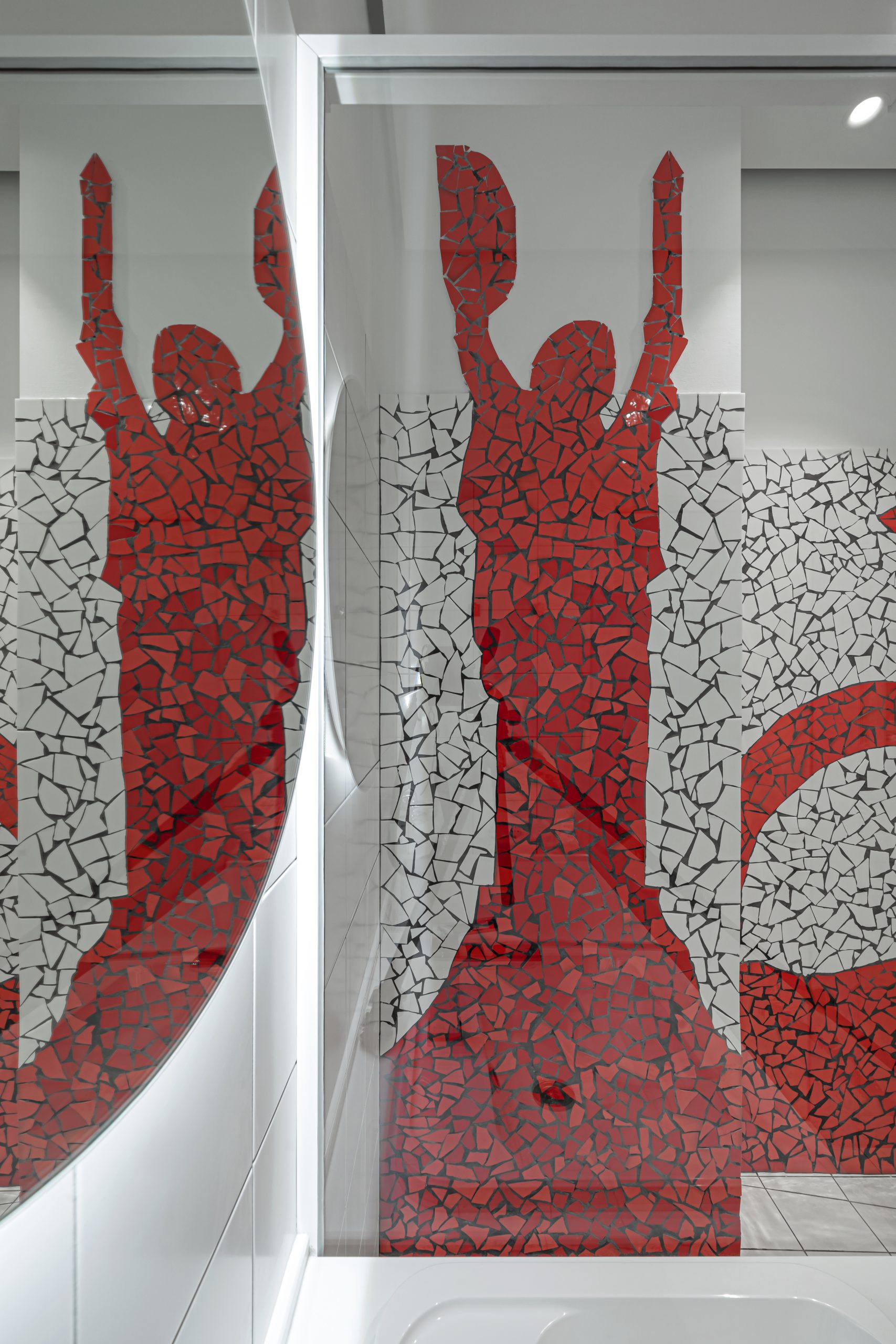 At the same time, realizing that the original drawing cannot be laid out on our own, we switched to searching for simpler options.

Thus, we came to a variant, which we eventually implemented – a partial silhouette of the city of Kyiv, which included the Motherland, the Independence Monument and the Arch of Friendship of Peoples.

Having no experience in laying tiles, and even more so – chipped tiles, we set to work.

Optimistic forecasts that the work would take 3-4 days were quickly dispelled. The whole process took 2 months. 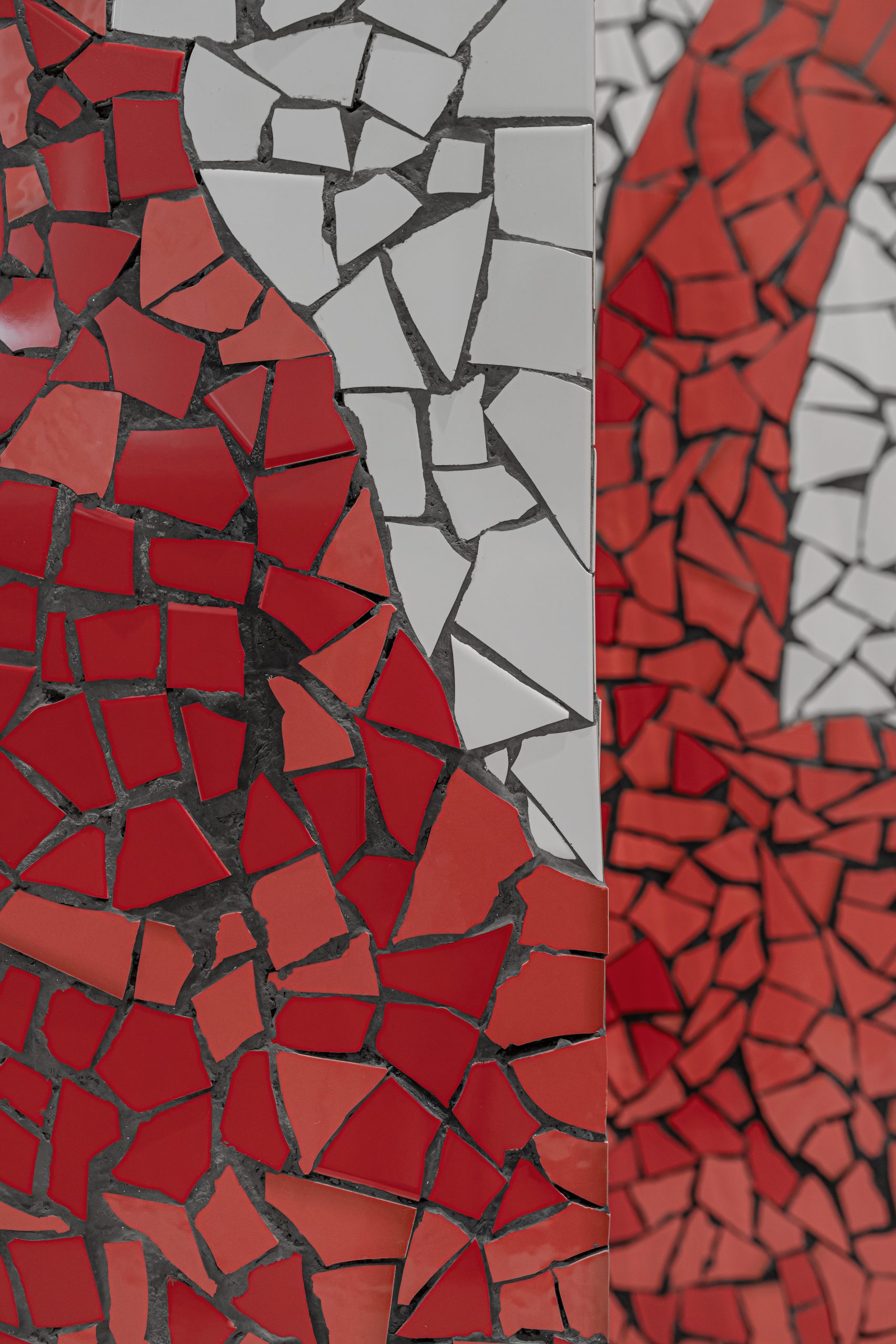 How it was? We bought the necessary amount of inexpensive tiles, adhesive mortar and tools in order to chop the tiles. The first couple of days were pretty fun. They beat the tiles, filmed funny stories, but very quickly realized that the forecast of 3-4 days was overly optimistic.

A fun idea turned into a monotonous and hard work, which stretched out for two long months.

It was hard as hell, but we hope it was worth it. 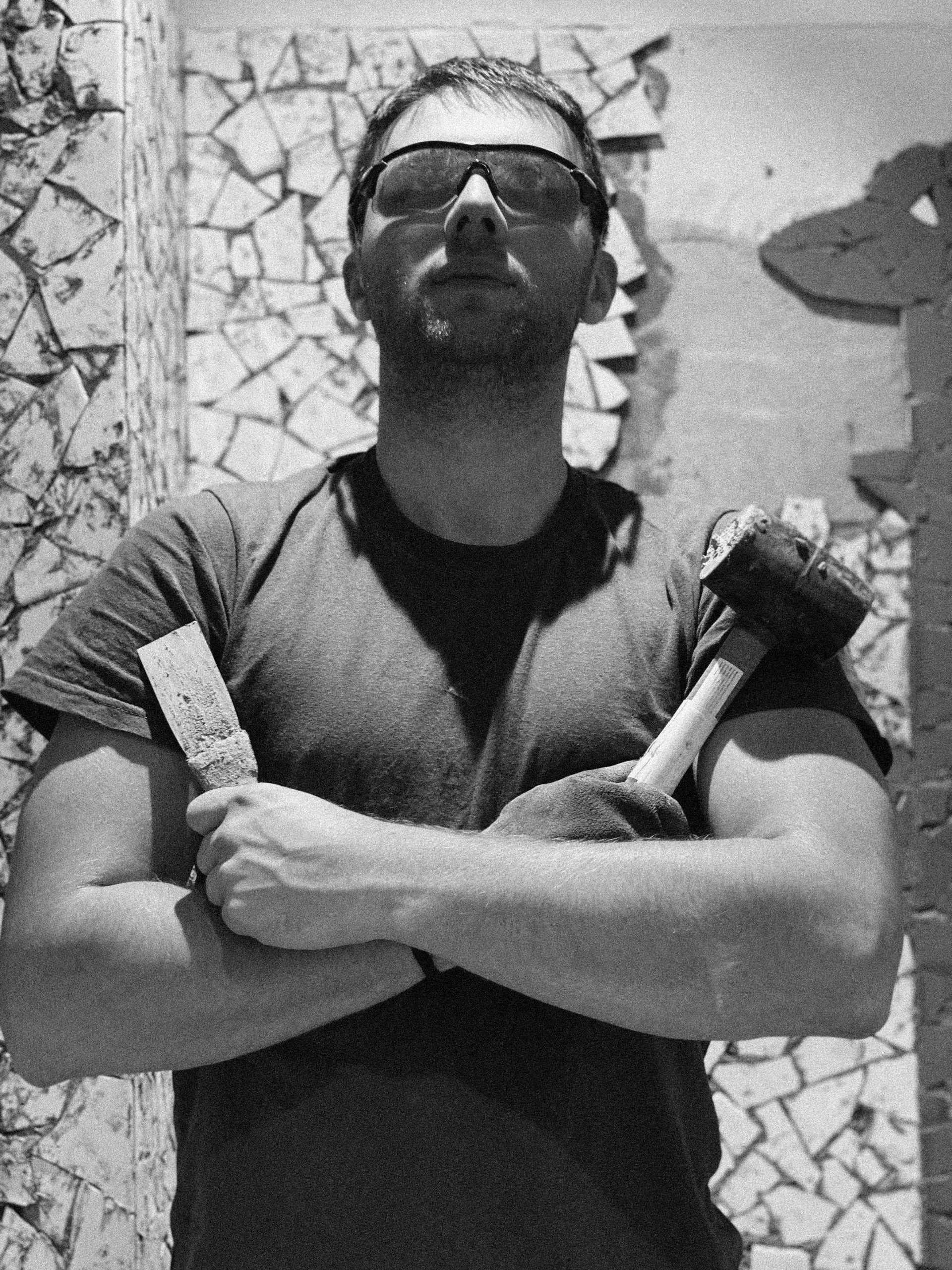 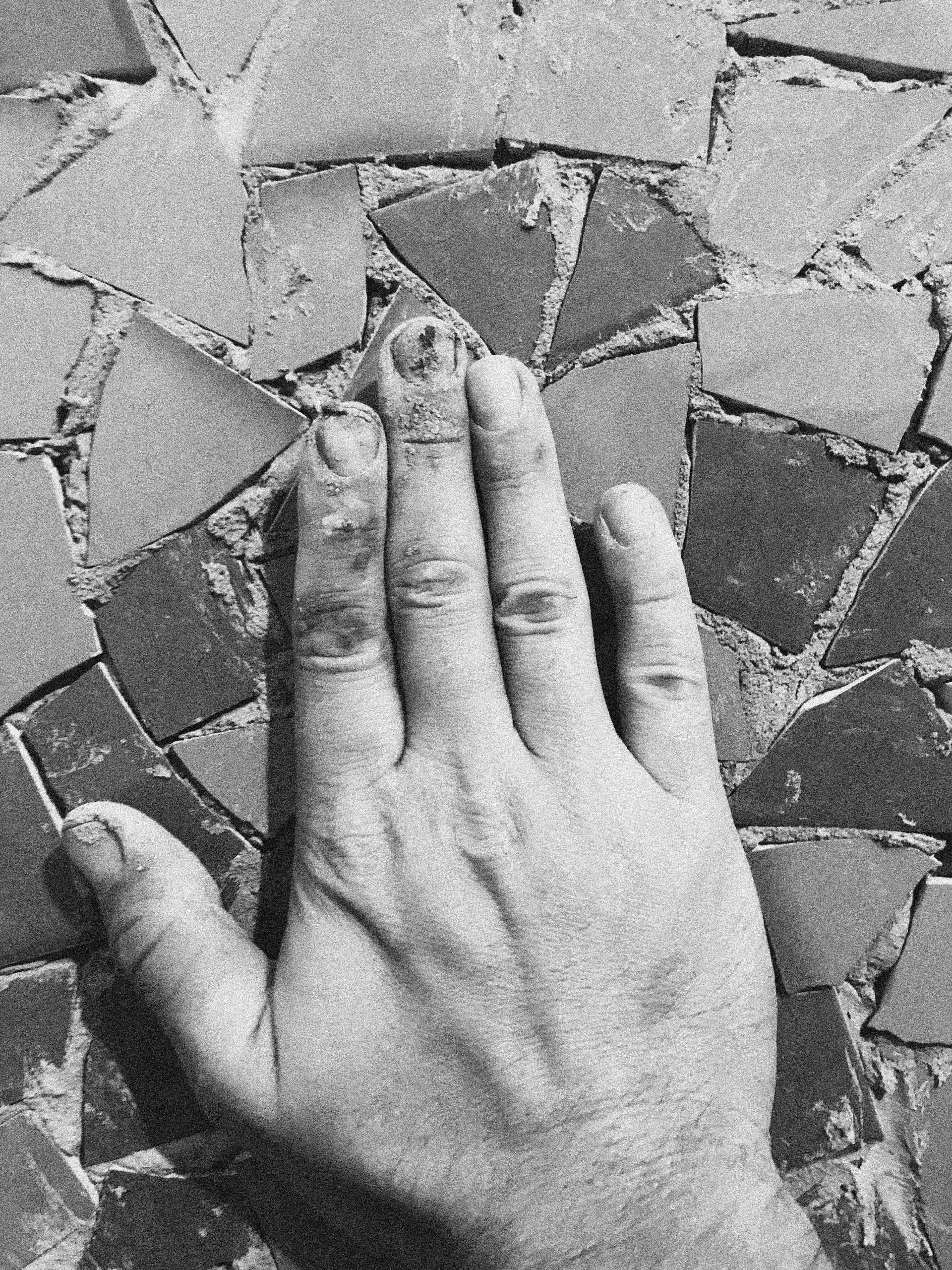